The daughter of a talented pianist/painter, Susan first heard strains of classical piano music before she was even born. Inheriting her Mother's artistic sensibilities and her Father's mathematical mind and enormous hands, playing the piano came very naturally, but it was her passion, hard work, and dedication to music that contributed to her prodigious ability. First lessons with her Mother by age two and formal lessons started at age six. By age seven, Susan knew she wanted to be a pianist and a composer. Quoting from her hand-penned diary at the time: "I always want to be a famous pianist and a composer". She has never wavered from her commitment to being a concert pianist, but has always focused more on being the best musician she can be, even if not necessarily "famous".
Winning many prizes as a youth, Susan went on to study at Yale University, the Manhattan School of Music and the Fontainebleau School of Music in France with some of the most famous concert pianists and pedagogues in the USA and Europe. After garnering more prizes in her twenties, she made her debut in Carnegie Recital Hall, Merkin Concert Hall, and throughout Europe, receiving unanimous acclaim from prestigious newspapers. She has pursued her performing and teaching career, serving as a true source of inspiration to her students and fans, while also raising a family of three prize-winning young musicians, who have now also distinguished themselves on the national and international scene as performers and composers.
Whether appearing before an intimate audience of 100 or a crowd of 1000, Susan delivers rhapsodic, edge-of-your-seat electrifying and magical performances that will captivate you, steal your heart and soothe your soul.

Note: Not for use as a Program Bio. 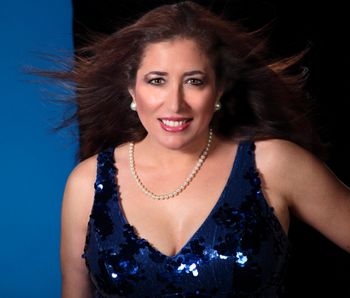 Rhapsody in Blue- Gown by Faviana Photo by Mike Canale 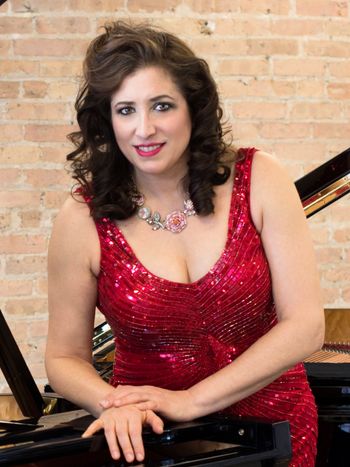 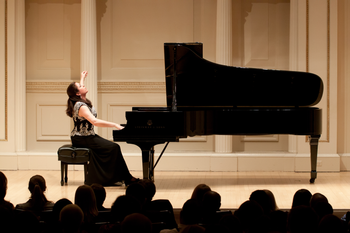 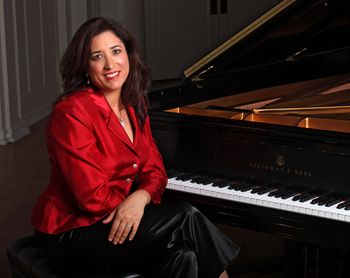 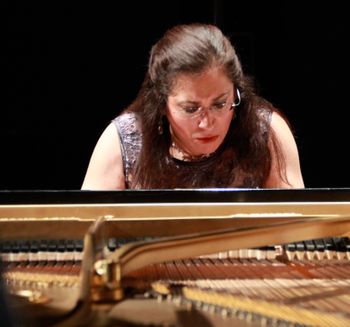 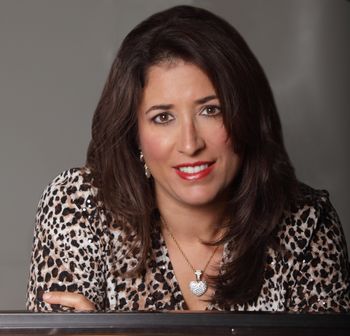 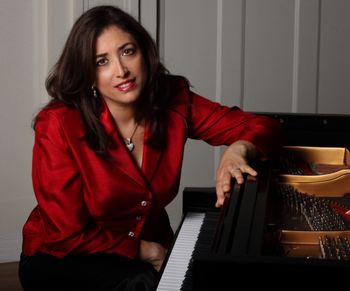 American Pianist Susan Merdinger has been internationally acclaimed in prestigious newspapers and journals for her stunning performances. The Frankfurter Allgemeine Zeitung described her recital as a “daring, enormously joyous presentation which captured and transfixed the audience”. Fanfare Magazine ( March/April 2014) declared that her “Carnival” CD was “exquisitely detailed and full of life”, likening her playing to that of legendary pianists Leonard Bernstein, Annie Fischer and Nadia Reisenberg. Among her many honors, was selected as an Honored Artist of The American Prize in 2019, and is a First Prize Winner of the 2012 (Professional Solo) and 2017 (Professional Piano Duo) Bradshaw and Buono International Piano Competition, First Prize Winner of the 2013 International Music Competition of France, a Winner of the Dewar’s Young Artists Award in Music (presented by the late Marvin Hamlisch), the Artists International Young Musicians Competition, the Artists International Distinguished Winners Prize, the IBLA Grand Prize Competition “Special Liszt Award”, and the Masterplayers International Music Competition. She is also a laureate of the prestigious Harveys Leeds International Piano Competition, Montreal International Concours de Musique, William Kappell International Piano Competition and Murray Dranoff International Two Piano Competition. Ms. Merdinger is the recipient of  Gold Medals in the Global Music Awards for her CD recordings "American Melting Pot" and "French Fantasy". In Fall 2019 she was awarded Best Classical Album in the Clouzine international Music Awards. All of her recordings have received glowing reviews in publications such as American Record Guide, Classical Sentinel, Audiophile Audition, Fanfare Magazine, The Whole Note, The Hyde Park Herald, Classical Candor, and the Audio-Video Club of Atlanta. Merdinger’s current discography includes eleven CD’s on the Sheridan Music Studio label - all available on iTunes, CDBaby and Amazon.

Performing her sold-out solo recital debut at Carnegie Recital Hall at age twenty-four, as a Winner of Artists International, Merdinger has continued to grace the stages of some of the world’s best concert halls including Merkin Concert Hall, Diligentia Hall in the Hague, Henry Wood Concert Hall in Scotland’s National Orchestra Center, Montreal Museum of Fine Arts, Sala Felipe Villanueva in Mexico, Ravinia’s Bennett Gordon Hall, the Preston Bradley Hall at the Chicago Cultural Center, Fullerton Hall at the Art Institute of Chicago, Logan Center for the Arts, Harris Theater for Music and Dance, and The Chicago Symphony Center. Merdinger was presented in her International Debut Recital Tour under the sponsorship of the International Concert Administration, performing throughout Europe. Merdinger’s live performances and recordings have been broadcast on WQXR, WFMT, WDAV, WMNR, CKWR (Canada), BRT-3 (Belgian National Radio), and BBC Television (United Kingdom). She been a featured guest artist on WQXR’s “The Listening Room” hosted by Robert Sherman, and on WFMT’s “Impromptu” program hosted by George Preston, Live from WFMT with Kerry Frumkin, and the “Pianoforte Salon Series”, hosted by David Schwann, as well as the Cable TV show “Bravura”. Susan was also featured solo recitalist for the Chicago Latino Music Festival and considers the music of Spain and South America one of her specialties. She has also performed for prominent dignitaries and celebrities including John F. Kennedy, Jr., the Governors of Connecticut and New York for many charitable fundraising events.  Her summer music festival performances include recitals and concerts at the Chautauqua, Norfolk, Summit, Quimera (Mexico), Lake Tahoe and Fontainebleau (France) Music Festivals.

Merdinger enjoys an active schedule performing as a concerto soloist, recitalist, duo pianist, and as a chamber musician. She has toured Europe and the USA under the auspices of the International Concert Administration Foundation and has collaborated with members of the New York Philharmonic, the New Jersey Symphony, the Chicago Symphony Orchestra, National Symphony Orchestra cellist, Steven Honigberg and international prize-winning violinists Ilya Kaler, Michaela Paetsch and David Yonan. Ms Merdinger is a Founding member of  Sheridan Solisti, The Five Greenes, and Pianissimo! - Chicago’s Premiere Piano Ensemble. She has been a Visiting Artist of the Chicago Symphony Orchestra Chamber Music Series for six years, garnering standing ovations for her performances with the Tononi Ensemble at The Art Institute and at Symphony Center. In recent seasons, Merdinger made her Chicago Orchestral Debut at Harris Theater with The Chicago Philharmonic under the direction of Sony Classical Artist Mattia Rondelli, and her International Orchestral Debut with the Orquesta Sinfonica del Estado de Mexico under Gabriela Diaz Alatriste. In May 2019, she debuted with the Northbrook Symphony Orchestra under Lawrence Rapchak, performing Brahms' Piano Concerto No.2, and won the Lorin Hollander Award of The American Prize for her Pandemic performance and live stream of Beethoven's Piano Concerto No.2 with the Northbrook Symphony under Mina Zikri in October 2020.

The 2021-2022 Concert season includes performances for the Ear Taxi Festival of New Music in Chicago, Beethoven's Emperor Piano Concerto with the Beaufort Symphony under Fred Deveyatkin, and the Poulenc Concerto for Two Pianos with the Northbrook Symphony.

Merdinger also hosts her own talk show, Merdinger's Musings, and Co-Hosts Steinway Sundays with Susan and Svetlana. From 2020-2022 she curated the Music with a View Concert Series℠ and Blue Skies Concerts℠ in Chicago.